Within my OpenHAB-Installation 4 Eurotronic Comet Z-Wave thermostats are running, after a test of a Danfoss LC13 variant from POPP ended in the negative. During the past heating period 2016/2017 these thermostats were run with batteries from different vendors/trade marks. From a lifespan period p.o.v. the results were rather poor. The longest period of time that a set of batteries kept a thermostat running was app. 3.5 months. Hence disappointing.

In the summer of 2017 I decided to switch to using mains adapters to avoid frequent purchases of batteries. On one hand due to costs, on the other hand to avoid outages in heating due to basically useless battery capacity indications. The capacity indication was so unreliable that planning of puchasing new batteries was not possible. Basically new batteries should be already at hand when needed, but without storing them for a long time and finding them discharged when needed. Ok, alkaline batteries don't discharge on a high rate when stored, but usually one tries for really fresh batteries.

3 Volts are needed, mains adapters with a corresponding output are available and the amount of power needed is not an issue. The only concern (as far as I thought) was connecting the adapters. The thermostats are designed for batteriy usage only, omitting a built-in connector for the usual plugs. But having a look at the local home depot there were wooden round sticks to be found, with a diameter really close to that of the batteries. Shortened to the appropriate length and fitted with screws and pushpins at the correct places, some cables soldered to them, a suitable adaptor was created that fit into the battery compartement quite nicely. At the beginning everything ran fine. The thermostats showed 100% battery capacity, reaction to the commands was fine, everything was good. The next heating period could start.

It was one of those days in the summer of 2017 when a heat wave came to its end. The windows were all open to cool down the interior, outside it was around 24 deg Celsius, inside 28 deg. were on the displays. I came back from work, opened the door and basically ran into a wall of heat. One look at a thermometer: 30 deg. ?!?!?! The radiator in the living room was running full blast (yes, central heating was not shut down during the summer by the landlord). Looking at the themostat I found it with an "INST" showing on the display. That is normally the case after a power outage, with these thermostats usually a battery change. In auch a situation the thermostat fully opens itself to allow installation. After the mechanical installation a tiny hidden switch near/in the battery compartement needs to be activated to tell the thermostat to adapt itself to the valve ("ADAP" on the display). Unfortunately there is no timeout for this state. The thermostat remains in this state until someone really presses the switch. And as long as noone does it, heating full blast is the result. In my case obviously for a longer period of time already as proven by the room temerature, despite the open windows!. Bummer.

OK, maybe a solitaire occurence? No, not really. A few weeks later 3 (out of 4) thermostats were heating unnecessarily because they detected a power outage. That was the end for the mains adapters, they went out of usage for the time being. I don't have a clue yet what happened here. A real power outage did not take place, other devices should have shown that as well, but did run without incident or malfunction. Maybe the power from the mains adapters was not filtered cleanly and the electronics inside the thermostats was affected by the remaining "ripple" or by high frequency infiltrations. They are not built for that, batteries do not have these issues. So to be clear about it: the company building the thermostats is not responsible for that. (Although it would really be good if they had provided the necessary filtering measures, a socket and provided software that could deal with a short outage. Or the possibility to use recharchable batteries. Well, one could have dreams...?)

The next heating period was due (really started on Sept. 7th, sitting in the living room at only 19 deg. C.) and instead of unreliable mains adaptor powering batteries were needed again. Instead of grabbing the next best set of batteries (as long as they were labeled ALKALINE), it should be a real battery testing campaign. Complete with notes and ensuring not to use long shelfed material. Here we go:

First purchase was a set of VARTA Alkaline "High Energy". "10 Years Power in Storage" the wrapping told me and on the cells themselves a "best before 12/2027" could be read. Hence recent stock. Best conditions for a test. Due to the operations on mains adapters the overview of batterie capacity needed to be reactivated, a new group was defined to reflect only the thermostats so they could be shown in a seperate graph. All 4 thermostats were issued with the fresh batteries on Sept. 4th 2017, all reporting 100% battery capacity in OpenHAB.

A first oddity: 3 days after inserting the batteries the reported capacity for the bathroom thermostat broke down to below 20%: 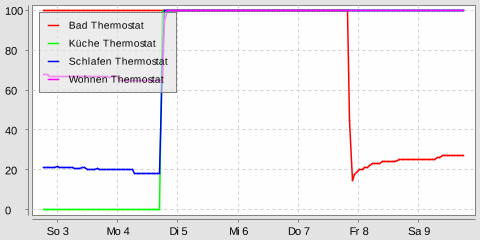 There was a slight recuperation, but something was not right. A possible explanation could be a faulty measurement due to high humidity (we are talking about the bath after all, where high humidity is part of the normal usage). Or leakage current on the circuit board etc. But I would expect that a manufacturer of a thermostat takes appropriate measures so it can be used even in a bathroom as that is a standard usage scenario. In the documentation there is only a mentioning of the temperature range it can be operated in (0 to 50 deg. Celsius). A declaration for a humidity range is missing. Nevertheless, using it in a normal household environment should be possible. Really strange.

Btw: the setup is basically the same as in the previous heating period 2016/2017, where it ran satisfyingly. With the difference that now it ran with OpenHAB 2.1 instead of OpenHAB 1.8 (no compatibility mode, pure OpenHAB 2.1!). Something in the inner works of the system was interchanged, so the two definitions for "setpoint heating" and "setpoint furnace" needed to be exchanged to have a correct control.

The battery test is finished. Here are the notes about battery capacity from September 2017 until January 2018:

The letters on the time scale are linked to the following events:

The decision is taken: the remaining 3 Comet-Z are to be exchanged to the follow-up model "Spirit Z-Wave Plus".